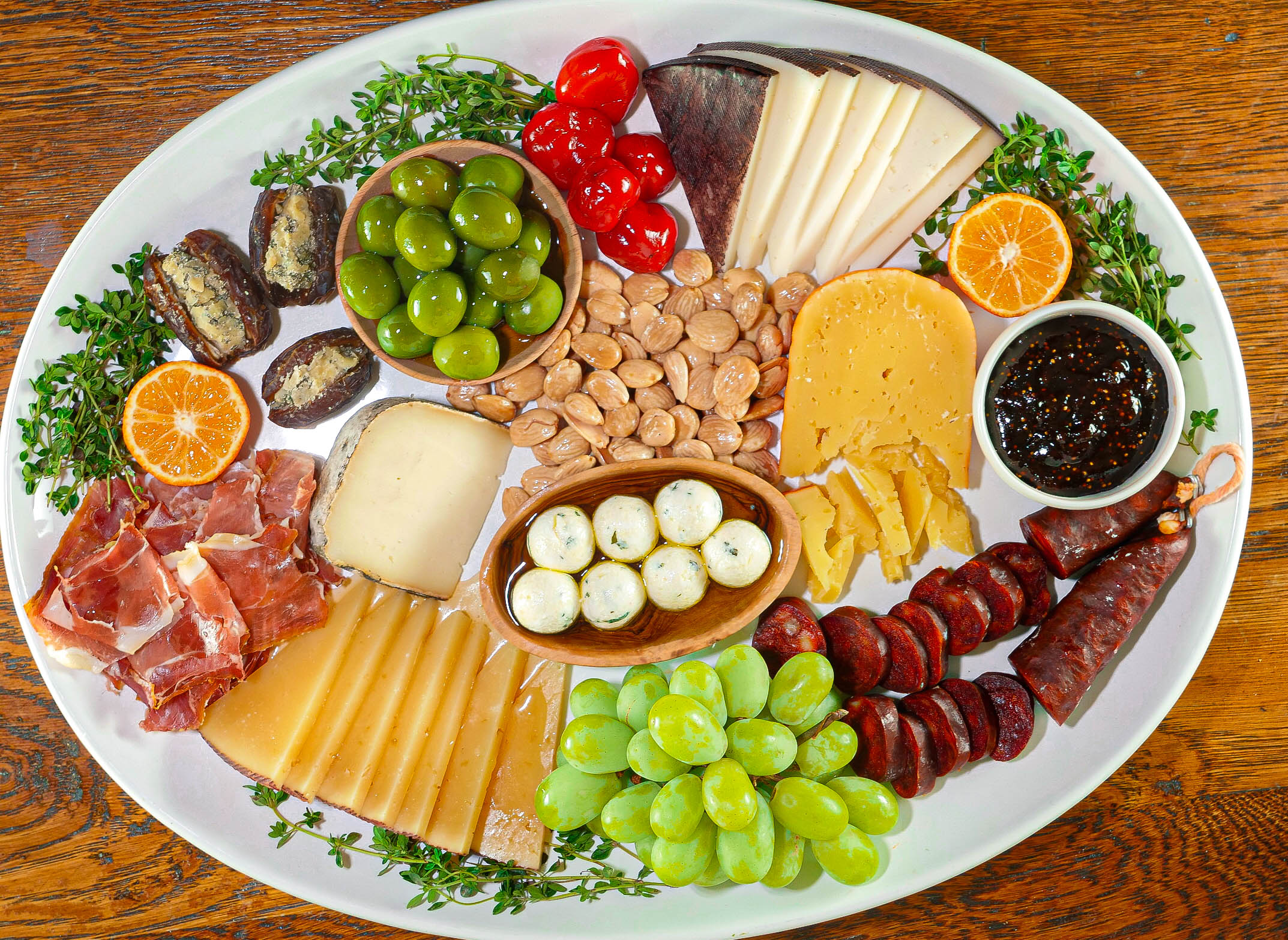 One of my favorite things about international travel is learning about a country’s culture through food and wine.  And while a trip to Spain may not be in the cards this year – we can still enjoy a tasting tour of its infamous wines, cheeses, and flavors!

If you’re new to Spanish wines they offer a great value and are a fantastic bridge to Old World wines for fans of New World wines from South America, California, or Australia.  Reading Spanish wine bottles is pretty simple too – they range in age from youngest to oldest and are classified as Joven, Crianza, Reserva, to Gran Reserva..(or most special.   You’ll also usually see the primary grape listed front and center on the label (if not on the back!)

Cava is Spain’s answer to French Champagne;  primarily made in Catalonia in the northeast by Barcelona.  Cava goes through the traditional method of secondary fermentation in the bottle to get its bubbles, it can be white or rosé and is usually a blend of Xarel-lo, Macabéo, and Parellada grapes. Most Cavas have a dry richness that complements crisp flavors. They’re fantastic for sipping to start a meal or to make bubbly cocktails too.

Albariño is produced on the western coast of Spain, north of Portugal, in an area called Rías Baixas.  Due to its coastal terroir, you can find a briny, ocean touch to this wine, which also has hints of white flowers and stone fruit. It’s fantastic with seafood!

A richer white worth seeking out are white wines made from the Verdejo grape from the region of Rueda. They’re sometimes blended with Sauvignon Blanc and are deliciously aromatic with an almost tropical vibe and notes of Meyer lemon and almond.

If you’ve started exploring Spanish wine, you’ve likely had a bottle or two of Tempranillo!  It’s the most planted red grape in Spain, and it appears under a few names, including Tinto Fino, Tinto de Toro, Cencibel, Ull de Llebre, and Tinto del Pais. The two most famous regions for Tempranillo are La Rioja – Spain’s most famous wine making region since Roman times and Ribera del Duero.

Just southwest of La Rioja is Ribera del Duero, known for its bold, aromatic reds, also made from Tempranillo. The wines from this region are Old World aged, deep and fruity, with slight woodsy back notes and are more opulent and polished than the rustic, earthy Rioja.

Garnacha or Grenache is actually a grape of Spanish origin despite being associated with the Rhone valley in France. In Spain, it is found in multiple regions and in Rioja it’s often blended with Tempranillo. Garnacha on it’s own can produce rose but can also make wonderfully ripe, cherry-raspberry fruited table wines,

Wines from Priorat are intense and muscular. If you love sunny, full bodied California wines but are looking for an earthier touch, this is a great region to seek out.  Most of Priorat’s red wines are made from a blend of Garnacha and Cariñena with Cabernet Sauvignon, Syrah, and others.

Monastrell is the Spanish name for the French Mourvedre and is the typical grape of the south of Spain near Valencia. It produces powerful, higher strength, full bodied wines with great structure and aromas of ripe, juicy red fruit, and pepper.

Let’s break a misconception – not all sherries are sweet! No tasting tour of Spain would be complete without the intense aromatics and bright acidity of their iconic fortified wine produced in Andalusia within the famed “sherry triangle,” between the cities of Jerez de la Frontera, El Puerto de Santa María, and Sanlúcar de Barrameda.

Sherries are typically enjoyed either as apéritifs with tapas or as a dessert wine after dinner – they have a variety of strengths, sweetnesses and flavors. The main types of sherries produced in the region include the fresher brighter Fino and Manzanilla sherries that are dry and delicious paired with food.  (In Spain, “Sherry Hour” is definitely a thing with a glass of manzanilla paired with almonds or grilled shrimp as a classic snack.)  As sherries age they take on deeper caramel color and nutty notes in Oloroso and Amontillado varieties while Pedro Ximénez sherries are sweet and sipped for dessert.

With so many amazing cheeses, charcuterie, snacks, and flavors it’s simple to create a full Spanish-themed tasting board or tapas platter to enjoy with your wine tasting!

Start with a mix of cheeses such as the iconic nutty imported Spanish Manchego cheese, made with sheep’s milk and often enjoyed drizzled with honey.  Goat’s milk cheeses are also popular in Spain with multiple aged varieties such as Garrotxa or a fun Spanish find of “Murcia al Vino” or “Drunken Goat”.  A DOP cheese from the Murcia region in southeast Spain – this cheese has a gorgeous purple rind from washing in a red wine bath, which also gives it a slightly fruity flavor and wine aroma.  Finally fresh balls of goat cheese marinated in oil with herbs is a Catalan classic.

Spain also produces amazing Cow’s milk cheeses such as imported Mahon with a complex, buttery and fruity flavor. San Simón cheese has a signature teardrop shape and smoky taste with a buttery aroma while Tetilla is mellow, buttery, and sweet. Be sure to seek out Spanish Blue Cabrales for it’s sharp, tangy, acidic, slightly salty flavor.  It’s excellent stuffed in dates or figs!

Chorizo sausage gets its gorgeous red hue and smoky flavor from a favorite Spanish made spice called “Pimenton” or Smoked Paprika.  It’s a great addition to your pantry for paellas, roasted potatoes, marinades, and spice rubs.  Spain also loves it’s peppers both roasted, pickled, and pureed in their infamous Romesco Sauce made with roasted peppers and almonds.

Jamon Serrano, a salted cured ham, is practically the culinary symbol of Spain (along with iconic dishes such as gazpacho and paella!  It’s a regular component of tapas and enjoyed across the country. You’ll see huge legs of Jamon hanging behind every tapas bar where they even have special equipment to slice it!

Another don’t miss treat from Spain to include on your platter are Marcona Almonds. They’re shorter, rounder, softer, and sweeter than typical California almonds and are often served roasted in olive oil, sometimes with herbs.

Olives are a must and are found everywhere in Spain as snacks, stuffed, in tapenades, or even just as olive oil for dipping bread.

Finally include some sweet Spanish specialties in your snackboard such as Dates, Quince Paste, Figs or Fig Jam, fresh oranges or mandarins, local honeys, and orange marmalade.  They’re all key flavors from Spain that are delicious as part of a savory snack board and also included in many Spanish desserts.

For a mini taste of Spain in a party bite try our recipe for Manchego and Serrano Party Bites or Hasselback Sweet Potatoes with Manchego.

PS: Be sure to check out our “Favorite Foodie Travel Cities” to temporarily scratch your travel itch too!