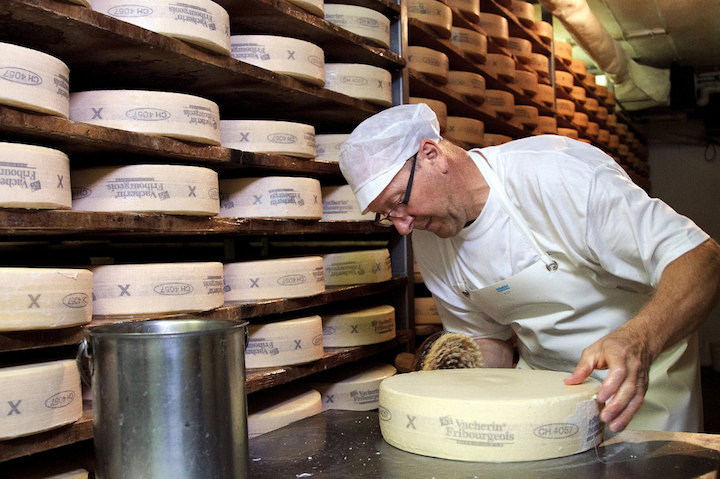 It’s pretty basic knowledge that cheese is made from milk; most commonly cow’s milk but also goat, sheep and buffalo milk…plus more exotic milks from camel, reindeer and even yaks! But how does a bucket of fresh milk become cheese? And how are so many different flavors, textures and varieties of cheese made from the same source?

Cheese is actually one of the best accidents in food history! Historians suspect it was discovered when a herdsman stored fresh milk in a pouch made from a sheep’s stomach and opened it to find the milk transformed into solid cheese curds and thin liquid whey. Yes it’s true, cheese is actually made by intentionally curdling milk…and the basic process is also the source of the infamous line in the nursery rhyme “Little Miss Muffet”!

To make cheese, all you really need are three ingredients: milk, salt and live microbial cultures including rennet. Here’s a bit of the science behind it. Milk contains two types of proteins: casein and whey. Cheese is specifically a result of curdling the casein.   After milk is poured into vats, a “starter culture” of bacteria is added to convert the milk lactose into lactic acid. Then an enzyme called rennet is added to curdle the milk.

Once the casein has curdled, whey protein is left behind as a thin, watery liquid. The whey is removed, salt is added, and the curds are cut into smaller pieces and heated to release more whey. The additional whey is drained off, which leaves clumps of casein or curds. At this stage you have what’s known as a “fresh cheese” like ricotta. In many cases the curds are pressed into molds and left to age or dry for various periods of time.

Thanks to centuries of cheesemaking experimentation and innovation, there are hundreds of different cheeses, each with its own unique taste, texture and aroma based on the type of milk used, how long it was aged, which type of bacteria was used in ripening, and whether or not the rind was treated.

The aging period (also called ripening, or, from the French, affinage) lasts from a few days to several years depending on the cheese. As a it ages, bacteria and enzymes transform the cheese’s texture and intensify flavor as the protein in casein and milk fat break down and change.

Soft cheeses such as imported Feta, Brie and Camembert, have been ripened for a short time. Hard cheeses are ripened for various lengths of time and range from semi-hard to hard. They include Cheddar, Gouda, Muenster, Manchego, Parmesan Reggiano and Pecorino Romano. Blue cheeses have a special ripening process by green molds and include cheeses such as Danish Blue, Cabrales, Gorgonzola, Roquefort and Stilton – see more in our piece “All About Blue”.

The outside or rind of the cheese can also be treated in an intentional way to develop flavors and textures. Bloomy rind cheeses are surface ripened which means that a surrounding fluffy white mold aids in ripening of the interior of the cheese. In this case, the outside of the cheese is coated with Penicillium candidum; a specific culture that forms into a “bloomy” edible crust. As the flavor-producing candidum mold breaks down, a delicious creaminess spreads throughout the interior of the cheese, giving it amazing flavor and a smooth texture. Examples of bloomy rind cheeses include imported Brie, Le Tur, Camembert, and Brillat-Savarin. Bloomy rind cheeses are generally creamy, rich and lightly sweet in flavor.

Washed rind cheeses, on the other hand, are immersed into a salt water brine (or sometimes wine, brandy, or beer). These liquids help generate the growth of a specific orange-colored bacteria on the rind which then flavors the interior of the cheese. This explains why you can spot a washed-rind cheese a mile away by its bright orange hue on the outside!   Examples of washed rind cheeses include Epoisses, Pont l’Eveque, Taleggio, and Raclette. Washed rind cheeses typically taste hearty, robust, and sometimes even a bit meaty with a strong aroma. They make a gorgeous addition to an autumn cheeseboard! For more inspiration see our post How to Build the Best Fall Snackboard.

♥ Now that you’ve got the basics down, here are a few fun facts about cheesemaking:

♥ Mozzarella cheese has a stringy quality because it’s kneaded like dough before being formed into its final shape.

♥ Cheddar cheese has its own cheese making technique known as (wait for it) cheddaring! Check out more here.

♥ Swiss cheese is made with a specific bacteria that produces carbon dioxide or CO2 when it digest lactose. The bubbles of CO2 are what create the holes in the cheese!