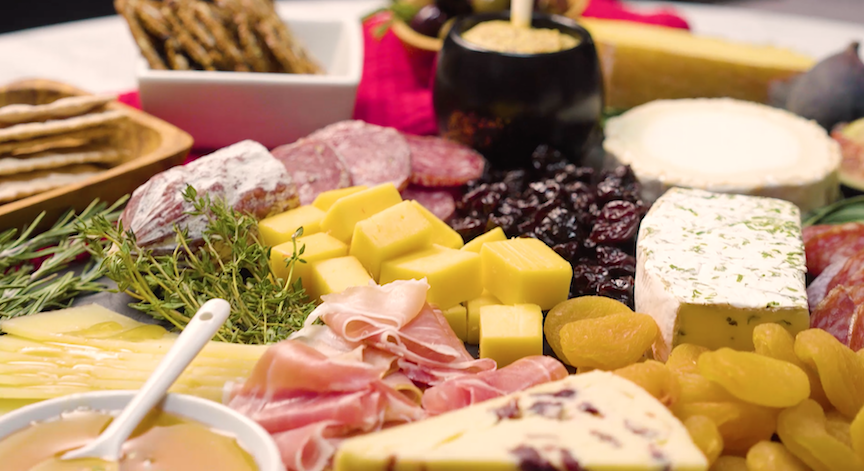 No matter where you go in the world, one thing stays the same: The holiday season is all about food and family. That said, cultural traditions are formed and the holidays are celebrated a little bit differently country to country with plenty of classics; as well as some fun and unexpected twists!

A Few of the Classics

From mince pies and figgy pudding in England to Buche de Noel in France and the Feast of the Seven Fishes in Italy there are many holiday dish traditions that have been represented in song, movies, and pop culture.

Hanukkah has its own holiday food tradition since the Middle Ages.  Latkes in some form or another – have been an important part of holiday meals. The fried potato pancakes are cooked in oil that recognizes that the Second Temple kept the Menorah burning with oil for eight days.

In Poland, Christmas Eve is often seen as the start of the new year. They celebrate by breaking oplatek, a special Christmas wafer, and wishing each person health, happiness, and joy in the coming year. Dinner include a multitude of dishes but always includes handmade pierogis often filled with imported Farmer’s cheese and potatoes.

Here in the US with our melting pot of cultures a few cheese-centric traditions have evolved that we here at I Love Imported Cheese enjoy celebrating. Try our modern take on Grandma’s ubiquitous cheeseball with our Cranberry Pecan Holiday Cheddar Cheeseball recipe. And no holiday gathering is complete without a current classic – an abundant cheeseboard filled with our favorite imported cheeses.   For inspiration and ideas check out our tips and Rocking a Holiday Cheeseboard how to video.

The Philippines has one of the longest holiday seasons in the world, starting in September and ending around January 9. Christmas plays, parties, and decorations are in full swing throughout these months. Cheese doesn’t feature too prominently in Filipino cuisine, yet Christmas Eve “Nochabuena” celebrations inevitably include Dutch Edam known locally as “queso de bola” or “ball of cheese” to be served alongside ham and warm bread.  Round and wrapped in red wax, queso de bola is rife with good omens: round things symbolize money and red is a symbol of good luck.

Where on earth did this come from? From the 17th to 19th centuries the Dutch were a maritime trading power, sailing the seas from Asia to the Caribbean. And since they were bringing cheese along with them, the global influence of Dutch colonialism explains why the Philippines’ beloved queso de bola is just as integral in countries a world away, like Mexico, Venezuela, and Belize.

In Scandinavia they don’t mess around when it comes to celebrating the holidays! In Norway, a main event for children is Saint Lucia Day on December 13. Celebrated in schools across the country with a procession to symbolize the light overcoming the darkness. One child is picked to lead the procession wearing a crown of candles, and the other students follow, also holding candles and singing a carol called “Sankta Lucia.” Later, back at school the children eat a traditional saffron bun called “Lussekatter” (which translates to Lucia cats, because the bun has a tail).

In Finland they go buffet style, or literally ‘Christmas table’ style, for their Christmas meal known as Joulupöytä. This traditional food board is comparable to the Swedish Smörgåsbord or Julbord containing several dishes typical of the season such as Christmas ham, fish, casseroles, and local cheeses such as Gouda, Gruyere, Muenster, Swiss, and Havarti. Sweden also traditionally celebrates Christmas with heaps of holiday cookies, warm mulled wine knows as Glogg, and Risgrynsgröt or holiday rice pudding. Whoever gets the bowl with a surprise almond in it will have good luck for the year.

From Friendsgiving to New Year’s Eve, holiday traditions everywhere have something in common: the Scandi love of hygge. Hygge is is loosely defined as “a cozy sense of well-being”.  It’s the process of slowing down to enjoy each other’s company or relax by the fire and a now-trendy tradition we can definitely get behind.   Check out our piece on How to Hygge for some inspiration.

When it comes to ending your holiday celebration on a sweet note imported cheeses are a classic. In England, entire wheels of Stilton are gifted and paired with fresh fruit and port for dessert. One theory is that for many years cheese was made between April and June, with the first flush of milk. After a harsh winter spring would bring a swell of milk to feed the new calves and the excess was turned into cheese. As Stilton took between six and eight months to mature, it was ready in time for Christmas and became a seasonal treat. But there’s no need to stop there!   Other ways to enjoy imported cheeses for dessert include our recipes for Caramel Apple Baked Brie, Goat Cheese Cheesecakes with Berry Compote or our Brie Thumbprints with Port Cherry Topping. They’re all sure to impress your family and friends and maybe become a holiday tradition of your own.

No matter how you celebrate we here at I Love Imported Cheese wish you the happiest of holidays and a wonderful new year ahead!