No tasting tour of Italy would be complete without a visit to the Emilia-Romagna region and it’s capital Bologna.  Known as the culinary heart of Italy; Emilia-Romagna is a region in north-eastern Italy just north of Tuscany and south of Milan and Venice.

The Po River runs across the region and marks the boundary between the fertile soil of the Pianura Padana Valley, the agricultural heart of northern Italy, and the Apennines Mountains on the border of Tuscany.  The first to spot the potential of the region were the Romans, who made it a center for the empire’s food production!

When it comes to infamous Italian foods and ingredients, Emilia-Romagna’s record is seriously impressive. With more than 200 traditional products and 26 ingredients with geographically protected status, many of your favorites are from this region.

Stuffed and egg pastas are found throughout the region such as tagliatelle, tortellini, and ravioli.  The iconic sauce of the region Ragu alla Bolognese holds a special place in everyone’s heart. From the French word ragoutier (“to awaken the appetite”), Ragu is a meat sauce traditionally made from a mixture of lean minced beef and pancetta, folded into a base of finely chopped carrots, celery and onions with a touch of tomato.

Another renowned ingredient from the region that’s a staple in every pantry is Aceto Balsamico Tradizionale di Modena or classic Aged Balsamic Vinegars. Deep, rich, glossy brown, and lightly sweet with an unmistakable syrupy consistency, this condiment is drizzled on meats, cheeses, and even strawberries for dessert.

The food products of the Emilia-Romagna region influence many other Italian classics too from chestnuts in sweets and breads to arborio rice for risottos.

But of course, here at I Love Imported Cheese it’s the iconic cheeses of the Emilia-Romagna region that gets us excited! The beautiful green pastures in the fertile Pianura Padana Valley makes for milk, butter, and cheeses of exceptional quality.

The undisputed king of all Emilia-Romagna cheeses is Parmigiano Reggiano, known worldwide for its rich, nutty taste with deliciously crunchy crystals thanks to it’s careful aging.

Unlike imitations often found in supermarkets, true imported Italian Parmigiano Reggianos can only be produced from the milk of cows that feed in a strictly defined area between the cities of Parma, Reggio, Modena, Bologna, and Mantova.

The first record of Parmigiano-Reggiano making is from 1254. Legend has it, Benedictine monks of the region created Parmesan when they needed to find a way to extend the shelf-life of the large quantity of milk they were producing. In Italy it has long been a key part of daily meals as an appetizer, grated on pasta, as an ingredient in a number of dishes…even the rinds are saved to be simmered in sauces!  You’ll spot it in huge wheels on the buffet table of many aperitivi in the region. Parmesan Reggiano is fed to babies as soon as they get their teeth (as any grandmother in Emilia Romagna will tell you, “It’s good for the bones”).  Even the pigs raised to make Prosciutto di Parma in the region are even fed the whey from Parmesan making – lending a nutty, rich flavor to the resulting salumi!  For a unique way to enjoy Parmesan Reggiano try our recipe for Mexican Street Corn Salad or Crispy Parmesan Baked Fries.

The ‘brother’ of Parmigiano Reggiano, Grana Padano is a semi-fat hard cheese left to age naturally at least nine months, up to more than 24 months. The name ‘Grana’ refers to the distinctively grainy texture of the cheese, while ‘Padano’ refers to Pianura Padana, the area where the cheese is produced. The first Grana Padano was produced around the year 1000 by the monks of the Chiaravalle Abbey, who became masters in the art of cheese-making. We love Grana Padano grated on pastas or into eggs, shaved on salads, or in our Lamb Ragu or Vegetable and Pancetta Risotto Recipe. 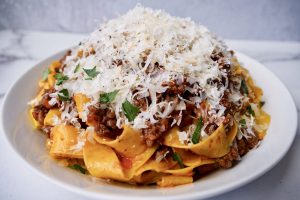 Provolone Valpadana is a semi-hard cheese produced with milk from cows raised exclusively in the the province of Piacenza. It originated during the second half of the 19th century, when the tradition of spun paste cheese typical of the south of Italy was adopted by dairies in the Po Valley.  Provolone Valpadana is produced in two variations: ‘dolce’ with a sweet, delicate flavor perfect for snacking, diced into salads or paired with pears, walnuts, and honey for dessert. The ‘piccante’ variety is spicy with a stronger taste that’s perfect as a component of dishes such as panini or our Philly Cheesesteak Eggrolls with Provolone or Garlicky Calzones with Broccoli Rabe.

Possibly the most unique cheese of the region is Formaggio di Fossa. Apparently in the 15th century, local farmers who were tired of raids began hiding their food supplies below ground in a pit or “fossa”. They discovered that cheese came out with a whole new range of delicious flavors and aromas…and Fossa cheese was born!  Fossa cheeses can be made with cow’s milk, sheep’s milk or a combination of the two. It’s typically aged for 30 days before being placed in the pit wrapped in cloth bags. The pit is closed off entirely to limit the oxygen, while the cheese ages for an additional three months. The cheeses are traditionally taken out in a formal ‘sfossatura’ on November 25th in a feast day a feast day cherished by the town of Sogliano.  Rindless, semi-hard, and with a golden hay-like color; the flavor varies based on the types of milk used but it’s often enjoyed in sauces for gnocchi or on it’s own drizzled with honey.