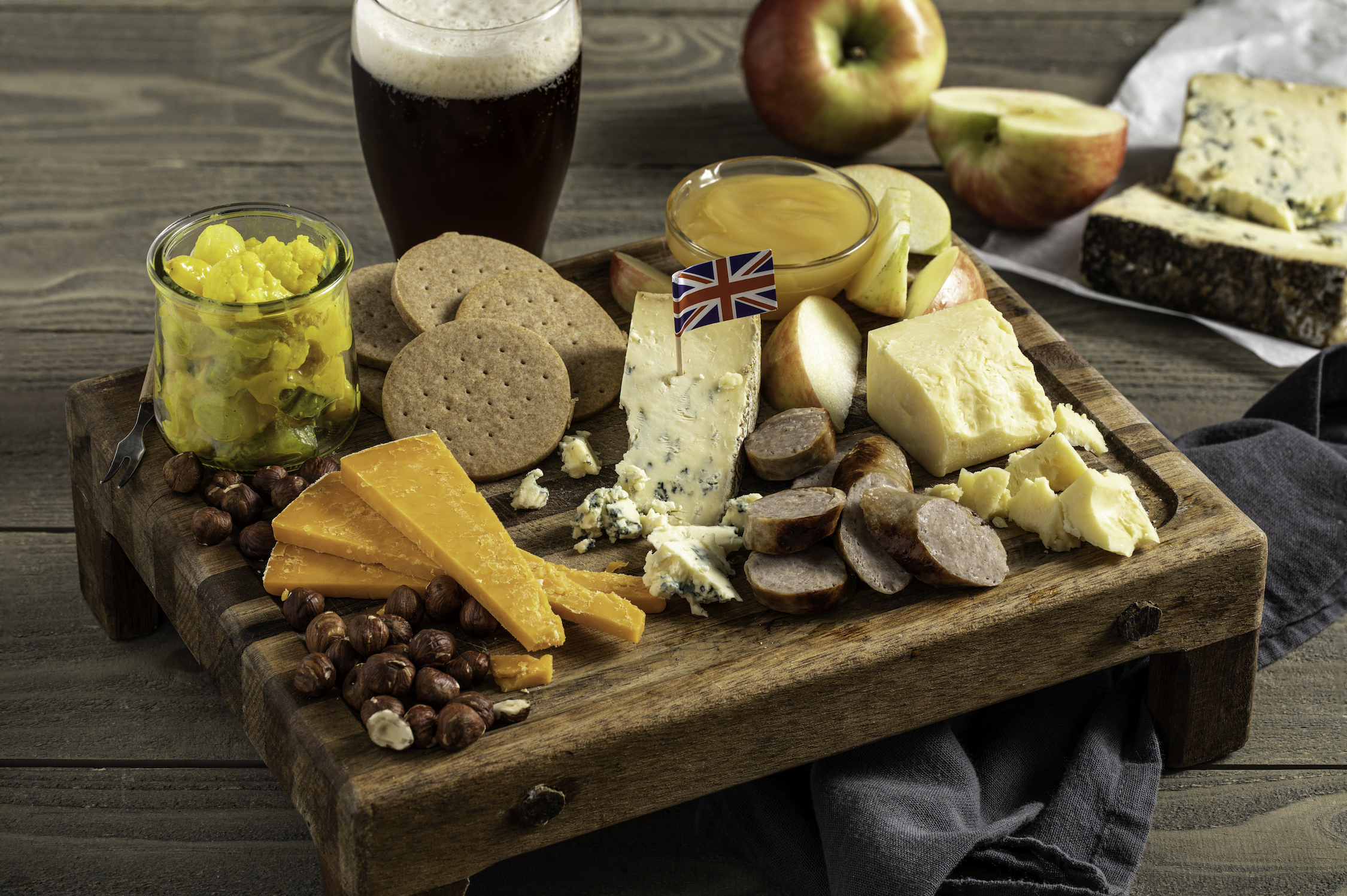 Great Britain is the name of the island that is home to the countries of England, Wales, and Scotland, as well as home to some of your favorite imported cheeses!  In fact there are over 750 cheeses produced in Britain today, from classic cheddars to more unusual modern varieties..but this wasn’t always the case.

World War II and a rationing of milk for almost 10 years after forced all cheesemakers, both big and small, to produce a single type of cheese called “Government Cheddar”.  As regulations relaxed in the last 60 years different varieties (both old and new) began to appear. Today Britain is home to some of the best cheeses in the world.

British cheeses were traditionally made from cow’s milk but since the 1980’s there’s been a rise in British-made goat and sheep’s milk cheeses as well as more fresh cheeses, soft bloomy rind cheeses in the French-style of Brie and Camembert, as well as semi-soft washed rind cheeses such as “Stinking Bishop”.  This delicately flavored but strong nosed cheese is washed in perry (pear cider) which helps it develop a beautiful pink rind.  Another popular and unique cheese, Cornish Yarg is a young, tangy, semi-hard cheese distinguished by its coating of fresh nettle leaves brushed onto the cheese in a distinctive pattern.

The majority of traditional British cheeses (known as ‘territorials’) are hard cow’s milk cheeses where the cheese is pressed after being made to remove as much moisture as possible. It’s then matured for anything from one month to over two years, allowing for a huge variety of textures and flavors.  Younger hard cheeses tend to be crumblier in texture with a fresh bright flavor (think Wensleydale or Cheshire), while more mature varieties develop crunchy savory salt crystals as in an excellent Aged Cheddar.

The most popular cheeses of Great Britain (and actually the world!) are cheddars of all kinds including aged, reserve, smoked aged, vintage smoked with a dusting of paprika. West Country Farmhouse Cheddar even has Protected Designation of Origin (PDO) status.

Cheddar has been made in Britain since at least the 12th century and is believed to date as far back as the Roman invasion.  In the 19th century a Somerset dairyman named Joseph Harding introduced new techniques to cheesemaking including a revolving curd cutter that saved time and effort and somewhat standardized the “cheddaring” process – earning him the nickname “the father of cheddar cheese”.  Learn more here in our piece All About Cheddar

Here are some other delicious, imported cow’s milk cheeses from Britain you should try:

♥ Beer Cheese is a soft cheese that has the flavor of a mild cheddar with sharp mustard and slightly hoppy notes. It’s amazing spread on crackers or toast or to top your favorite burger.

♥ Cheshire is a hard, slightly sharp, crumbly textured cheese originally produced in the county of Cheshire. As with Cheddar, It is one of Britain’s oldest cheeses and believed to date back to the Romans. It can be either white or orange (with the addition of annato) and is fantastic melted in cooked cheese dishes or paired with fruit cake or fresh/dried fruits.

♥ Double Gloucester is a hard cheese with a sharp taste, sweet aroma, and satiny texture. It has a deep orange hue thanks to annatto seeds and can often be found sold with chives or onions mixed in as well as in a unique cheese known as “Huntsman” with layers of Double Gloucester and Stilton.

♥ Dunlop is a specialty cheese of Scotland with a creamy nutty taste and primrose yellow rind.  It’s delicious with Assam tea and hot scones, oatcakes, mustard, and whiskies.

♥ Red Leicester cheese is mellow and mild with a striking rich orange-red color. It pairs well with beer and English strong ales.

♥ Sage Derby is a semi-hard cheese with a buttery taste and amazing herbal flavor from the addition of fresh sage. It’s a gorgeous addition to any cheeseboard!

♥ Shropshire Blue is semi-soft, sharp and strong blue cheese with a crumbly texture. Try it paired with Cabernet Sauvignon or Côtes du Rhône wines for your next tasting.

♥ Blue Stilton and White Stilton are two of the most famous British cheeses and also known as “The King of English Cheeses”.  It’s also relatively young compared to some British cheeses having first been made in the 18th century. Named for a village near Peterborough, both White and Blue Stilton have Protected Designation of Origin (PDO) status and now must be made in the counties of Nottinghamshire, Derbyshire, and Leicestershire to a precise recipe. It also must only be made in a traditional cylindrical shape, be allowed to form its own crust, be unpressed. Uniquely for Blue Stilton it must have delicate blue veins radiating from the center thanks to the introduction of penicillium roqueforti mold. Stilton is a classic enjoyed with Port wine or in bright spring recipes such as our Roasted Rainbow Beet Salad with Stilton or Grilled Chicken and Strawberry Salad with Stilton

♥ Wensleydale is a firm cheese with a flaky/crumbly texture and a subtle sweet honey flavor. One of Yorkshire’s most famous and Britain’s oldest cheeses; it was originally made in Wensleydale in the Yorkshire Dales by Cistercian monks who arrived to England in the 11th century.  You’ll often see Wensleydale made with dried fruit mixed in such as cranberry or apricot. It’s perfect for a cheese dessert course, to pair with apple pie, or to nibble with Sauvignon Blanc.

Hungry for more?  Try our recipe for a pub classic Double Cheese Welsh Rarebit featuring both Gloucester and Stilton cheeses for a taste of British cheeses and culture!